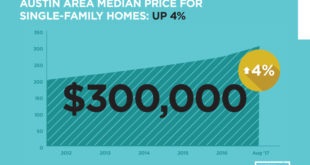 Abor released the August housing report for the Austin/Metro area. ABOR reported that this past summer was one of the best on record. Will the fall season see the same? The median house price for the Round Rock area topped $300k and the growth is expected to stay. You can read the full report below.

AUSTIN, Texas – Sept. 19, 2017 – The 2017 Central Texas summer selling season was the strongest on record in terms of single-family home sales and median price across the Austin-Round Rock Metropolitan Statistical Area (MSA). Single-family home sales volume jumped in the city of Austin in August, while median price held steady according to the August 2017 Central Texas Housing Market Report released today by the Austin Board of REALTORS®.

Coupled with rising home prices, this recent surge in home sales activity made May-August 2017 the highest-grossing summer selling season across Central Texas real estate in the region’s history. For the fourth time this year, single-family home sales dollar volume topped $1 billion ($1,128,565,155) in a single month within the five-county area, which is an increase of 5.9 percent from August 2016.

Dr. Jim Gaines, Chief Economist for The Real Estate Center at Texas A&M University, agreed: “The Austin-Round Rock MSA looks like it is moving toward a more normalized housing market. Similar to what we’re seeing across the state, housing inventory levels are slowly increasing, despite continued increases in sales volume and median price. That could indicate that in the latter half of 2017, we will likely experience some slowing of the home price increases that have become common in recent years – not price decreases, as the relationship between home buying and selling activity begins to balance out.”

Guthrie concluded, “With the Central Texas population growing at record levels, housing affordability continues to be strained. While we’re currently seeing positive upticks in housing inventory across our region, housing prices will continue to rise with demand. As Central Texas REALTORS®, it’s our commitment to advocate for affordable housing options, particularly within entry-level homebuyers.”

To learn more about this report or ABOR you can visit their website here.