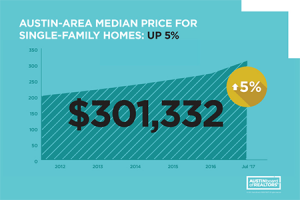 The Austin Board of REALTORS® has released the July 2017 Texas Housing Market Report. Report shows the Central Texas housing market is steady and making some strong gains. To read the full report below.

Brandy Guthrie, 2017 President of the Austin Board of REALTORS­®, commented: “In years past, the high demand of the summer selling season has further constrained inventory levels and further pushed up home prices. This year has been different, with steady gains in sales volume as well as listings and inventory throughout the summer. During a month when housing inventory should reach its lowest point of the year, housing inventory across the Central Texas region is at its highest point since fall 2012.”

Guthrie continued, “Strong homebuilding activity throughout Central Texas – particularly in Williamson and Hays counties – has been a key driver of housing inventory growth and in starting the region’s housing market on the path towards a balance between supply and demand. It’s important to note, however, that as home prices and development costs continue to rise, so does the price range of homes on the market.”

The 2017 Austin Quarterly Briefing recently released by Metrostudy showed that the pace of single-family home starts in the Austin area are at their highest level in 10 years, with approximately 1,000 more home starts in the second quarter of 2017 than the year prior. More than half of these home starts were in the $250,000-$299,999 price category, with Cedar Park/Leander West, Pflugerville and Kyle/Buda comprising nearly one-third of home starts activity. Metrostudy’s boundaries cover Hays, Williamson and Travis counties.

During the same time frame, active listings for single-family homes experienced double-digit gains throughout the Austin-Round Rock MSA, jumping 16.9 percent year-over-year to 7,965 active listings. Active listings, which indicates the quantity of homes available on the market at any given time, increased 20 percent in Hays County, 13.3 percent in Travis County, 26 percent in Williamson County and 10.2 percent in the city of Austin.

Guthrie concluded, “While housing development is critical to maintaining inventory amidst rapid demand, the long-term sustainability of our market lies not in the pace of development but in the price points and types of housing options being developed. Without sound development policies in place that allow for lower-cost housing solutions to be built in Austin and in surrounding markets, our region’s housing affordability crisis will only continue to worsen.”

For additional housing market statistics and infographics for the Austin-Round Rock MSA; Hays, Travis and Williamson counties; and the city of Austin, please visit ABoR.com/statsjul17.